Anyone who produces podcasts knows the typical technical challenges that lurk in the background, such as background noise, interrupted connections or microphones that are suddenly no longer recognized by the PC's system control. The most important part of every recording is the excellent quality. But how is this achieved? Especially in times of #StayAtHome, when we cannot meet our podcast guests face to face? 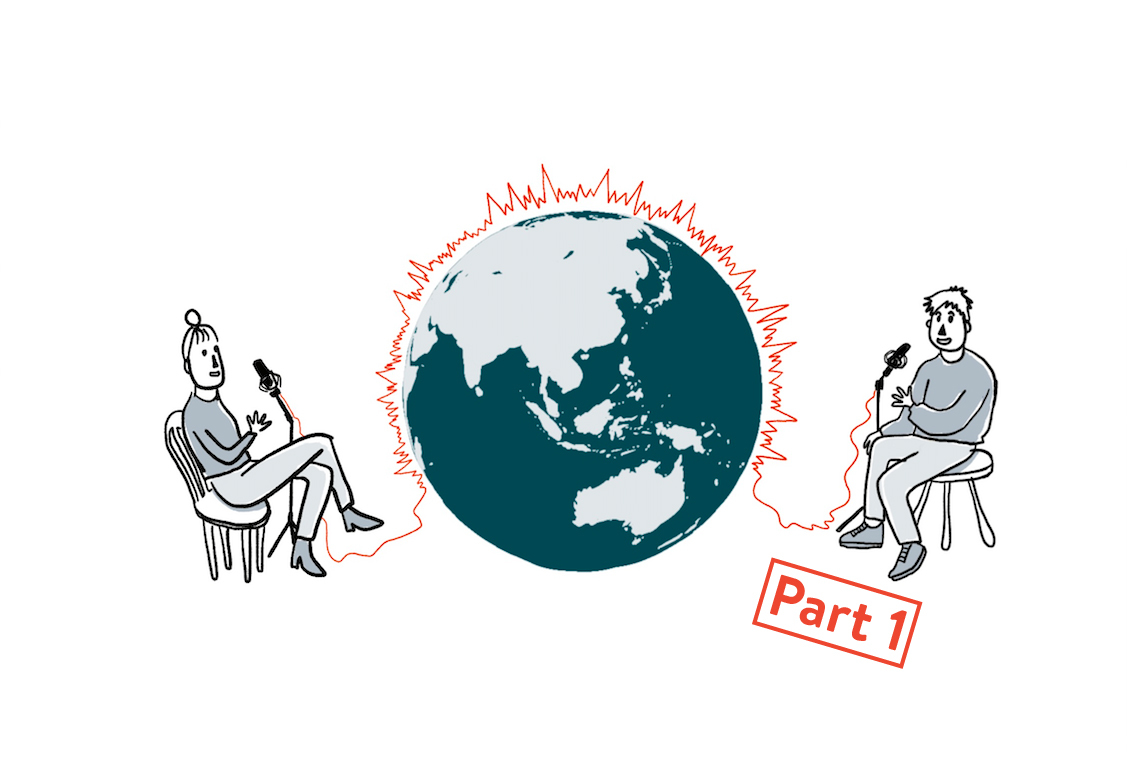 Thanks to modern technology, podcast participants have not had to sit in the same room for a long time. In fact, for some time now, a significant proportion of all multiperson projects have been recorded individually in their own homes or studios. Our guest author Julian Laschewski will explain in our two-part post, remote recording, what you should pay attention to in such recording situations, what a double-ending is, what programs are available and what obstacles there are. Have fun with part 1 - the sequel will be available next week (June 4, 2020) on our blog.

What does “double-ender” mean?

Of course, the conditions are not always fulfilled on both sides. Maybe you only have one microphone or recording device and therefore can’t use anything else. In such cases, of course, you can pass the microphone. But most likely, listeners will notice this in the recording and find it disturbing. This is also only an option if everyone is sitting in the same room. Not only since Corona it is very likely that for a podcast recording several people join together over the internet. The advantage is that any number of participants can record a soundtrack at the end of the episode without unnecessary noise caused by a bad Internet connection - so the finished episode sounds much better.

How can I make a double-ender?

It is very easy to use - especially since there is a whole range of web-based online tools available today that do a lot of the work for you. Ideally, you should record the audio track of each participant separately and “just” have to cut the result together after finishing.

Individual audio tracks also give all participants more flexibility when recording, since Podcaster rarely live together in a shared apartment and sometimes it’s also not that easy to find interesting conversation partners in your neighborhood. Therefore, it is an advantage that we have access to a wide range of online tools that help us record in excellent quality, no matter if your partner is in the next room or in another country. Of course, this also involves a number of problems that stand in the way of an accurate result. Fortunately, there are several programs and tricks that make podcasting life easier:

Studio-Link is one of the best known online services in Germany, used by a large part of the German podcast audience. Its biggest advantage: high-quality and almost lossless connections even with complicated podcast setups - thanks to the integration of the Opus codec and the DAW. Studio-Link can be used as stand-alone software, which means that if a user installs it on a PC or Mac and then offers his own system to invite co-stars via a link. Use has become very easy with the current version and is quick and easy thanks to the address book and the desired names.

After a recording, the respective audio tracks of the participants end up as uncompressed flac files, either in a folder on your computer or directly in a recording software compatible with the Studio-Link plug-in. Attention: With Studio-Link everyone records each other’s tracks as well - but being over the Internet, this can lead to failures and losses. So a double-ender will only become that when you have the tracks recorded locally by up to five other participants sent to you.

Yes, handling and initial setup could be a little easier with Studio-Link. And yes, some podcasters may not be familiar with flac files at first. However, this web service plays in a league of its own in terms of possibilities and quality - so it is worthwhile even for newcomers to take a closer look and invest some time.

The basic version of Studio-Link can be used for free, the paid version offers a number of convenience features - including preferred names instead of cryptic user IDs or the creation of simple invitation links for our guests.

Zencastr offers a similar range of functions, but has some editing features on board. Unlike Studio-Link, it does not require any additional software or plug-in installation, but starts directly in the web browser and invites guests to chat with it. However, in order to access the full range of configuration options, you need to pay around 18 euros per month. In the free version, podcasts can be recorded with up to two guests and eight hours per month - although this restriction has been lifted for the duration of the Corona pandemic.

The audio tracks are broadcast by Zencastr as MP3 files. Post-production and filters cost extra, unless you want to do these production steps by yourself. If you wish, you can directly attach Intro sounds, Outro sounds, mid-roll and other sounds to output the finished sequence. In the paid version, the sound tracks are also saved as uncompressed Wav files with a bit rate of 16 bits at 44.1k kHz. However, in practice this does not always work, so in the end only compressed MP3s are available for editing. Stupid.

So Zencastr’s proposals don’t sound bad, in theory, but with the right knowledge, Studio Link proves to be the best alternative. Zencastr’s additional comfort features are a nice bonus - but none that can’t be made by free programs like Audacity itself and much easier. Also, many Zencastr users complain that the audio tracks slow down in the middle of recording and therefore move the other tracks around. This can be corrected during editing, but at the end of the day it’s an unnecessary job that you’d probably rather avoid. However, if it should happen, or with another tool, that audio tracks suddenly become out of sync, all you can do is listen carefully and correct them. It is recommended that you listen randomly every ten seconds to find out when the scrolling, and therefore the asynchrony, occurs. The forward audio track should be cut at the point of error and rewind a little until it sounds clean again.

Zoom is similar to Skype, a conference and video call software (not to be confused with Zoom, the audio interface manufacturer). In the free version, the program can connect up to 100 people, but is limited to a maximum of 40 minutes of meetings. This will probably be enough for only a few podcasts to record an entire episode. For short conversations, however, it is ideal.

After successfully registering for your account, you can start right there, open a meeting and send a link to the participants. All they have to do is open the link and they will be sent directly to the other end of your line. As the owner of the call, you click on “Record” and everything is recorded. Please note: You have to click on “End of call” at the end of the meeting to make sure that the recordings are broadcast as well. Zoom saves them as an M4A audio file and, if desired, as an MP4 video file.

Unfortunately, the major disadvantages of zooming are quickly listed: The sound tracks are not broadcast individually, the sound quality cannot keep up with Studio-Link, and if there are disturbing or background noises in the audio track, they are very difficult to filter out. Therefore, working with a local backup (so a double-ender) is a good idea, which makes the whole thing much less convenient and unnecessarily complicated for inexperienced users.

Cleanfeed works very similarly to Zencastr. One you have successfully registered, the web-based user interface opens up, allowing you to easily record the conversation. The standard version is completely free and does not reduce the quality of the transmission. The only drawback: if you want to record the conversation, you have to buy the pack for 28 euros per month. As an additional price advantage, there are some features you won’t find in the competition, starting with the possibility to connect several devices that record audio tracks separately if you have several participants in the same place. Or even the possibility of arranging an audio track. This can be useful if there are noises or faults in the audio. The tool automatically scans the track online and repairs it in the appropriate places with the information it has. Another extremely useful feature is the well-known “Echo Cancellation”. In spite of some podcasters, it can happen that the voice of the speaker is heard on your own audio track due to incorrect recording settings. With careful attention to detail and many hours, this problem can be solved manually, but the Cleanfeed algorythm offers equally good results with just a few clicks. By the way, this also helps a lot with too much room reverb, in other words: it sounds like you recorded in a church. As with most other tools, Cleanfeed’s bit rate and volume can be adjusted individually.

Skype is the leader in the voice over IP (VoIP) industry, which was already widespread when Teamspeak and ICQ saw the light of the day. Today, the “Skype for Business” variant is widely used in many companies for meetings, as it is directly integrated into most Office packages. The web variant of Skype is also ideal for recording podcasts or at least interviews. Similar to Zoom, Skype is not a classic audio recorder, but simply establishes the connection between the participants in the conversation. The only requirement: everyone must have a Skype account. With all other tools presented here this account requirement does not exist.

As soon as everyone has arrived virtually, the recording can begin. Slightly hidden in the so-called burger menu (usually represented by three horizontal lines or three dots) is the option “Record”. Once activated, this will cause a WAV file to fall out of the tool at the end. But that’s about it. Useful additional functions such as single track recording or individual settings are missing here.

We therefore do not recommend using Skype to record podcasts, especially as the quality often fluctuates and at the same time the volume of the people speaking can be turned up or down.

Our clear favorite for remote recording scenarios is Studio Link. Although the ease of that many similar tools offer is missing in some places, the recording quality and range of functions are easily worth the compromise.

In the second part of the article, we will explain the possibilities of local recording with the corresponding communication tools and our own backup solutions.